I decided to plant four jalapeño plants at the beginning of the summer. Little did I know, each plant grows a ton of peppers—and now, I need something to do with them all. I made jalapeño poppers a few weeks ago, but I wanted to take it up a notch and make something a little different. Plus, with football season just beginning, I’ve been looking for some tasty game day apps. People stuff bell peppers, right, so why not stuff jalapeños? 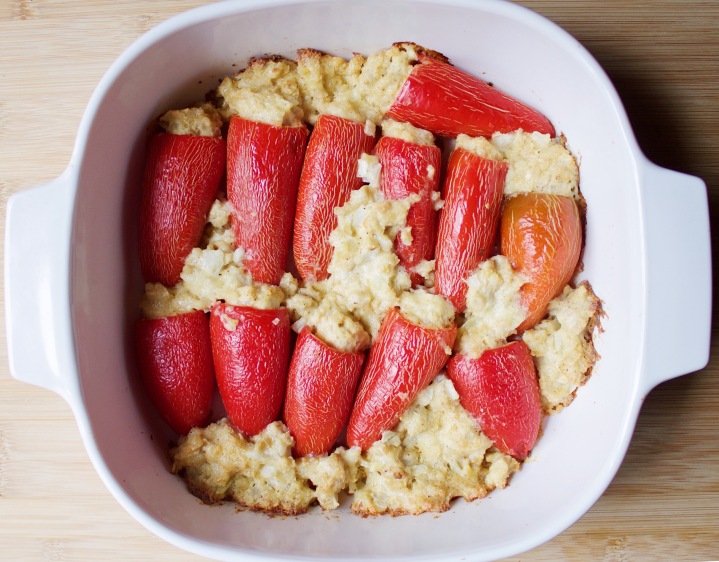 Red jalapeños are actually what happens when you leave green jalapeños on the plant for a little bit longer. They’re more mature, so they’re spicier than the green ones. And when they begin to age, they get ridges in the skin. It’s perfectly normal—it just means they’re pretty hot. I sliced these jalapeños near the stem and took out as much of the seed and membrane as possible. That’s where the heat is, so removing those parts cuts down on the spice quite a bit.

The stuffing is very versatile; feel free to substitute beef if you’d like, or substitute sweet peppers for a vegetarian option. You can interchange the types of cheese you want to use, too—it’s all up to you to make the dish your own.

I also seasoned the stuffing with some garlic powder, salt, black pepper, and cayenne, but feel free to season it as you wish. I also only made nine peppers, so I had plenty of stuffing leftover. But the stuffing is enough for about 15 peppers.

Tip: These red jalapeños are spicier than green ones. For a more mild spice, use green jalapeños.

Directions:
Preheat oven to 350. Cut off tops of peppers. Scoop out as much of the seeds and membrane as possible (you can leave a bit in if you’d like some extra spice). In a small pan, sauté onions and garlic in splash of olive oil. Then, in a small bowl, add onions and garlic to softened cream cheese. Add cheese, breadcrumbs, and chicken, and combine. Season with spices if you’d like. Scoop stuffing into peppers. Cook in an oven-safe dish for 40 minutes. Let cool five minutes and serve.